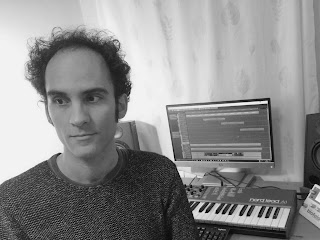 Daniel Guillén was born in Zaragoza, Spain, where he currently resides. He had classical piano training and graduated in Spanish Philology. His love for ambient and experimental electronic music led him to learn sound synthesis and music production, releasing his first album in 2016.

His influences include organ and choral music, 70s and 80s electronic and kosmische music, early new age, psychedelic folk and drone, and the works of many experimental artists, mostly in the ambient territory. He has a deep interest in meditation, dreams, mysticism, mythology and symbolism, all of which have had a great influence in his approach to creation.

Daniel's compositions are recorded for the most part with a variety of synthesizers and effects, sometimes including organic sounds and field recordings. They cover from melodic synth pieces to evolving atmospheres that often feel like calm yet adventurous journeys, dynamic and serene at the same time. His music has mostly been released on cassette by some well-known international independent labels such as Sounds of the Dawn, Constellation Tatsu, Aural Canyon, Muzan Editions, Inner Islands and more. From his home studio, he continues experimenting with soundscapes designed to evoke a sense of the numinous and to help both himself and the listener to explore the world of Imagination through sound.